Some hacks are so simple you can’t help but just assume they work. But it turns out, like most things in life, they aren’t always as they seem on the surface. For many, a quick swipe or two of mascara is as necessary as a cup of coffee in the morning. When done correctly, you can make your eyes look bigger and brighter in under a minute. Mascara is a product cosmetic commonly used to enhance eyelashes. It may darken, thicken, lengthen, and (or) define your eyelashes.

There are three common dry mascara hacks out there. Each one to fix the same problem, restore a dried out bottle of mascara. A friend of mine told me about the first, which is where you put a tube of mascara in a cup of hot water and let it sit for a few moments. The idea is that it looseness the mascara a bit but t be honest, it didn’t really work all that well.

So the next hack mascara hack I tried putting a few drops of almond oil into the tube. Proponents of this hack claim it will make your previously dried out mascara liquid again. I think I put in about 5 drops and then swirled.  Yes, it improved the mascara but it was really oily and not something I necessarily wanted to use on my face.

And finally, we come to the mascara hack that actually works. Who would have ever thought you would need to put contact solution in mascara, but hey, it really works. 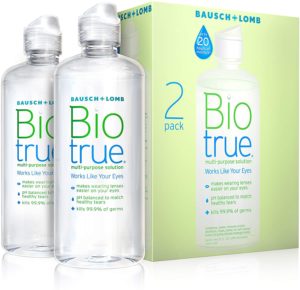 The contact lens solution made a big difference in my dried-up mascara. I started off putting in about 3 or 4 drops. I replaced the and gave it a little wiggle to make sure it was good and mixed and then tried out the consistency on the back of my hand. It was still a little eeeh so I added another two drops and it was perfect.

I actually revived my dried out mascara!

I get it – mascara does expire. The average life span is about 3-5 months, so after that, get rid of your old product. Otherwise, you’re risking bacterial infections, and no one wants that.

So yes, I know you are supposed to replace your mascara often, but honestly, my mascara wasn’t that old. I can’t explain why it dried out so quickly but it did and I hated to toss it out knowing it wasn’t all that old.

So if you find yourself in the same position as me, with a fairly new(ish) tube of mascara that dried out, this is a fact-checked hack, that really does work.